Live and work in harmony with technology

One of the things that few people know about me, is that  I built and live in a tiny house on wheels. 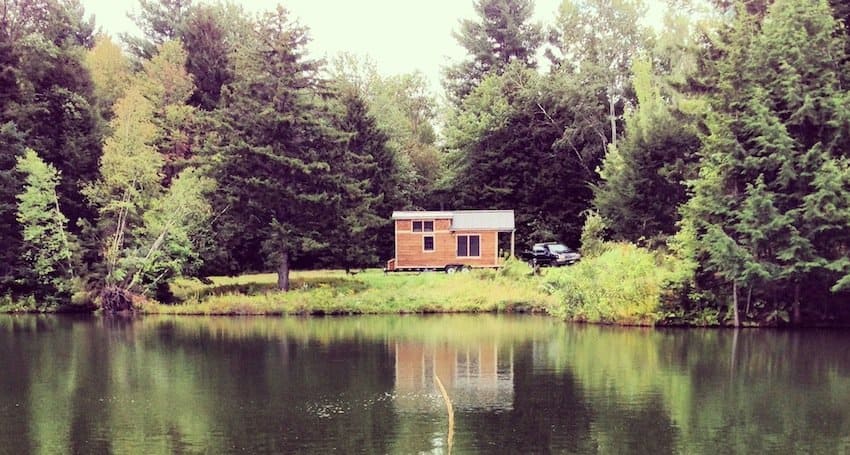 This is the story of how that came to happen.

On June 1, 2012, I packed up the contents of my desk into two plastic tote boxes, left my ID Badge on my desk, and walked out of the office. It was my last day as a full-time, salaried employee. I got in the car and drove about an hour- to the Morrisville airport in Morrisville, VT. There, in an empty airplane hangar was a brand new 22′ trailer loaded down with about $1000 worth of lumber.

I had done it. I quit my job and started construction on my very own tiny house on wheels. 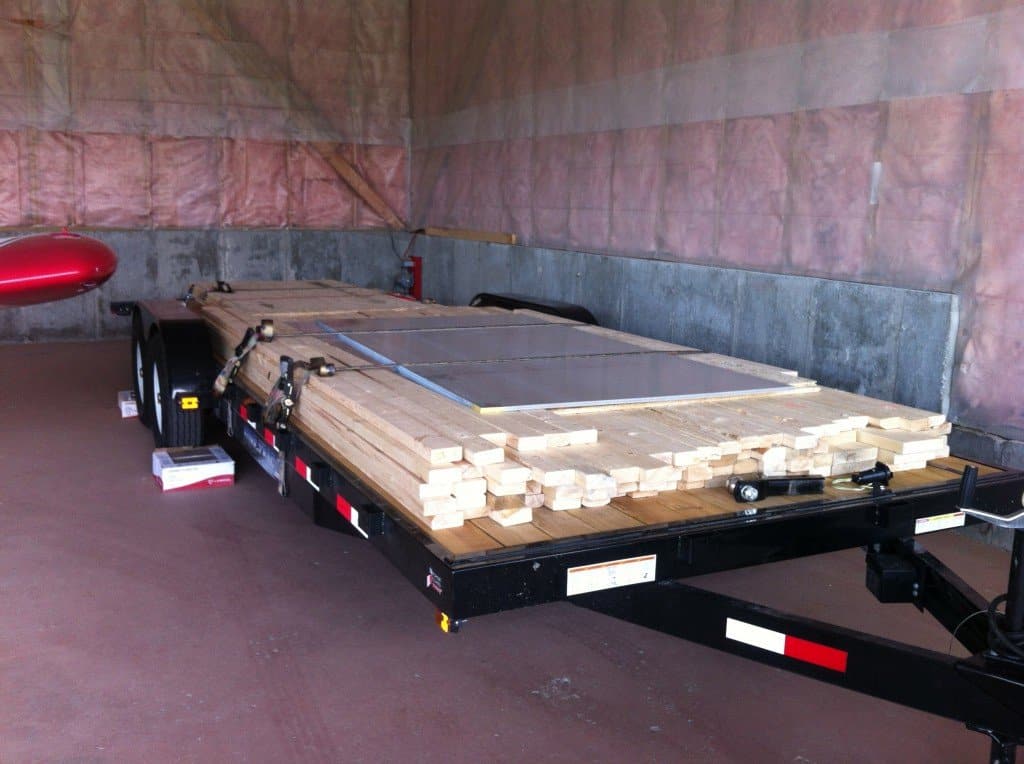 Of course, the real story wasn't so simple… 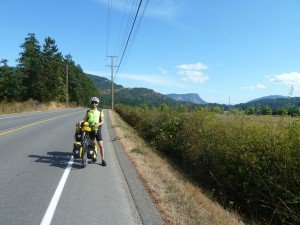 After I returned from my bicycle tour, I knew that I couldn't last in the corporate world for much longer. There just wasn't enough flexibility to accommodate the life that I wanted to live. I didn't feel inspired by the work that I was doing, and I felt like time was just accelerating. I could literally envision myself 10 years later- a little older, a little weaker, a little bit more tired, sitting in the same cubicle, doing the same work, and for what? There was no way that I was going to allow it to continue forever. I knew that I wanted my own business, too. I had already been working with Jonathan Mead for close to 6 months. Cloud Coach was already up and running- I had even launched my first product with reasonable success. But there was still something missing from the picture. I knew that being in business for myself could mean fluctuation in income- the feast or famine business cycle, and general uncertainty of being on my own.

I also knew that my current lifestyle, though not extravagant, would be threatened.

My main worry was having to come up with close to $1000 each month for rent and utilities. Even though I felt really good about my new business and its potential, I didn't feel responsible just quitting my job without some more stability. I knew I would be a fool to just leap and hope I would start making money before my savings account went dry and the rent came due.

If only there was a way to live rent free…

I don’t remember what first got me interested in Tiny Houses, but I had certainly seen them before. I remember seeing a flyer on the cork board of a cafe advertising a tiny house workshop in the woods of Vermont. It promised that anyone could learn how to build a simple 10’ X 10’ structure in a weekend. 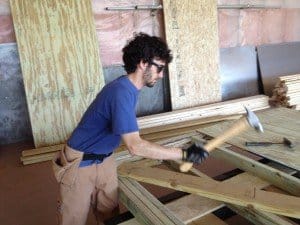 Though the idea of learning carpentry had always intrigued me, I had never considered building my own home. There were all the associated costs to consider: Buying land, paying an architect, hiring engineers, electricians, etc. Not to mention the property taxes which would essentially be like rent, and the biggest problem- as a (then) 26-year-old and newcomer to Vermont, I wasn’t sure how long I would want to stay here. It seemed silly to invest in a house when I might just turn around and choose to leave in a year or two. It was while reading an article on Tammy Strobel’s blog, Rowdy Kittens, that I noticed a link in her navigation bar: Our Tiny House. Curiously, I clicked through, and was immediately reading Tammy and Logan’s story of downsizing and eventually building their Tiny House on Wheels. I was immediately hooked on the concept. Here was a structure I could build with out permits, park without paying taxes, and live in for very little money. My mind was racing… doing math equations planning months out into the future.

I realized that with my steady salary, and some existing savings I could potentially put away enough money to build a tiny house in the summer of 2012.

And so, with my new found determination and goal, I went into what my girlfriend calls “hobo mode”. I spent money only on what was absolutely necessary- everything else went into a savings account dubbed “the tiny house fund”. As the months went by and the dollars added up, things started to feel more real. The first purchase I made with my tiny house slush fund was a set of plans. I decided on Tumbleweed’s Fencl. A popular and (relatively) large tiny house on wheels. There were some things that I wanted to change about the design, but overall, I liked the layout and styling. The plans weren’t cheap, but laying out the money really helped cement my decision, and gave me something to show people who asked about the project. I knew there were some things that I wanted to change about the design, which I figured that I could just “do” while I was building it. I was very happy when a close friend of my parents, Milford Cushman, offered to help me make “changes” to the plans.

Little did I know, he had something else in mind.

When I first sat down with Milford, I expected that we would work from the Tumbleweed plans and simply add some things that I wanted- dormers in the loft and a bumped out porch. However, what Milford had in mind was starting from a blank piece of paper, and drawing exactly the house that I wanted. The only trouble? I didn’t know the exact house I wanted. What proceeded was an inspiring series of design sessions. Each time I left his studio, I had a new ream of papers to look at, consider, and make changes to. Milford taught me about the concept of Wabi Sabi. I learned that every design decision had a trade off- and that there was no “perfect” design for my house (or anything for that matter). It was absolutely exhilarating to watch a seasoned design professional go to work. Here are some of the things that stuck out the most about the experience: 1. He asked great questions. 2. He listened my the answers. 3. He could draw anything I could describe, as well as things I couldn't. There was no expectation that I had to do what he wanted. This was going to be my house.

And so, on June 1, I had my last day at my corporate job and began construction on the tiny house.

It was an incredible feeling: scary, exciting, freedom. 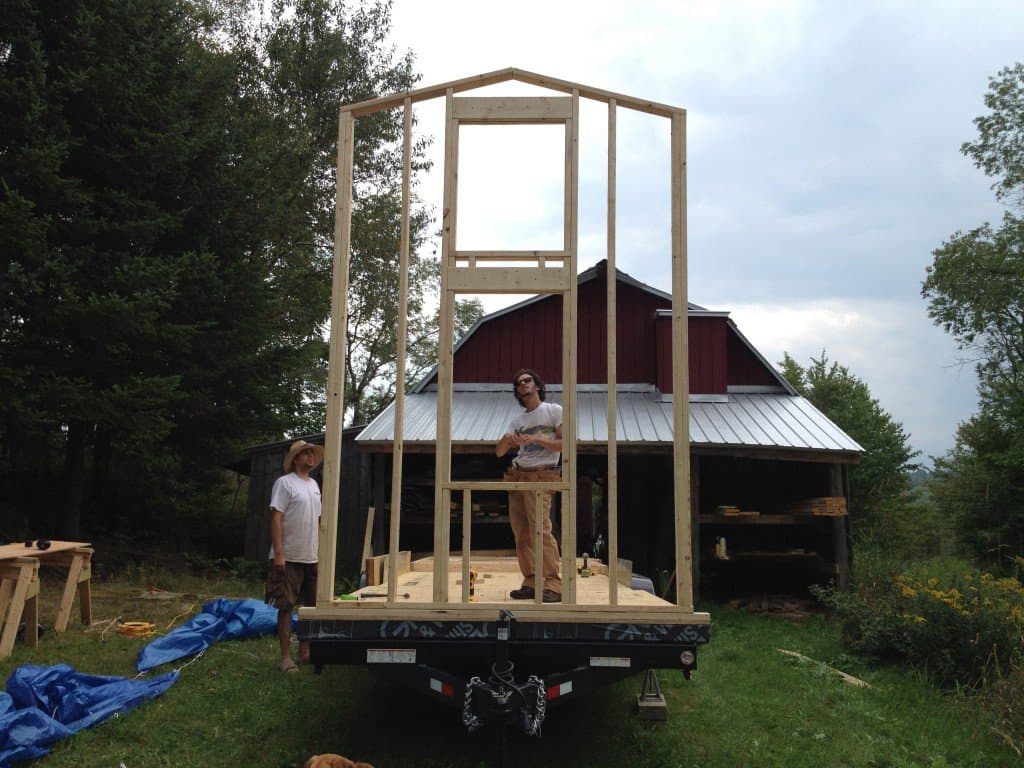 Now the real work would begin: The work of building a house.

I had never done construction before. Sure I was handy with a cordless drill and could use a chop saw, but as far as the actual construction of a structure? Never. My estimate of how long the project would take is laughable now. I thought that I would have it done by the end of the summer. In reality, the project would take what most other DIYers seem to take for their tiny houses: One year. As I write this now and June 1 2013 approaches, I almost don’t see how it would have been possible to do things any faster. But the reality of the situation was that I only worked 1-3 days per week on the house, and that was with a carpenter that I found to help and hired via Craigslist. I’ve been working on the project ever since. It has been a long and rewarding experience, and now it’ almost done. Here are some photographs from along the way. 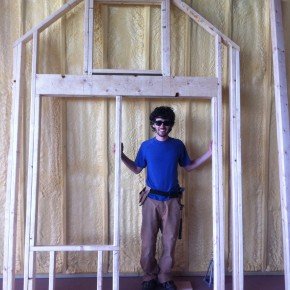 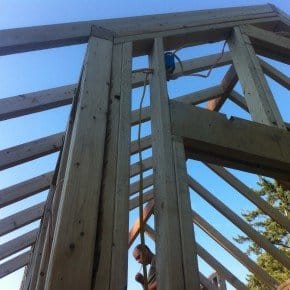 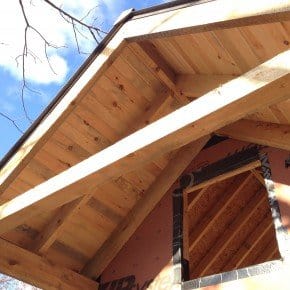 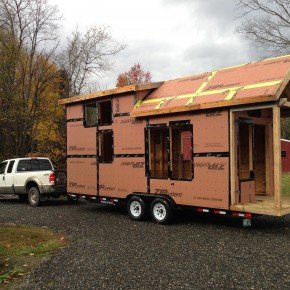 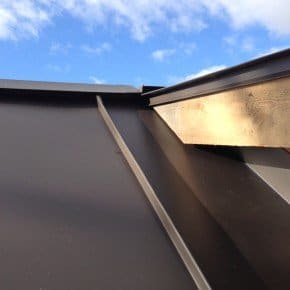 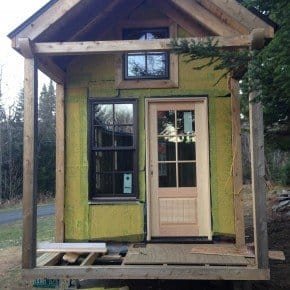 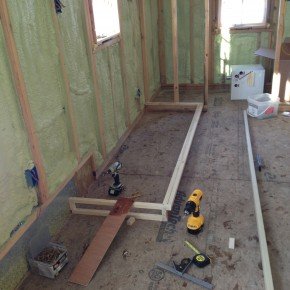 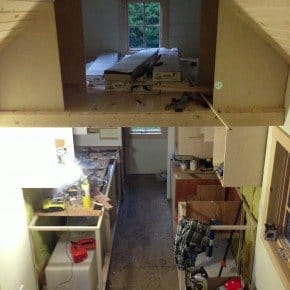 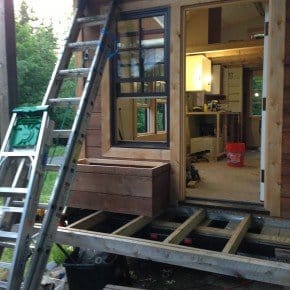 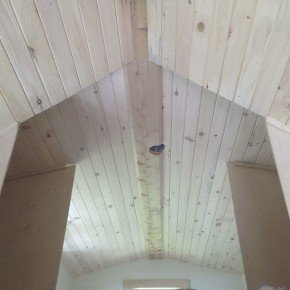 I wrote a guide called Tiny House Decisions. In it, I help you go from dreaming to doing, examining all of the major (and minor) decisions you need to make in order to successfully go tiny! Click here to find out more.